Welcome to The Roadhouse: Participatory Dance & Workshops channel, featuring a special livestream of interactive dance workshops and live dances that you can join in and dance along to virtually. With your hosts Andrew Milton and Chris Wright.

Participate: Each dance and workshop has its own unique registration link which you can access under artist listing below. View the full schedule below and learn more about participatory workshops here.

For questions about registering, please email us at programming@nwfolklife.org or call 206.684.4189

You can watch the livestream below or on Facebook. 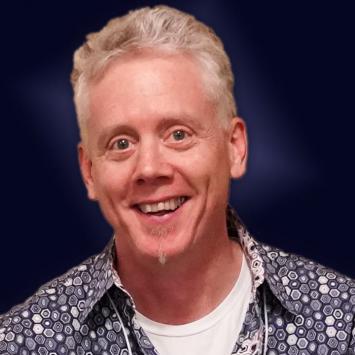 Learn Zydeco dance fundamentals with some fun and challenging footwork to boot. The irrepressibly funky polyrhythms which signify this Louisiana music will have you on your feet and shouting for joy, like magic! No partner necessary.

Sean Donovan combines passion for music and dance with his great love of teaching to provide joyful, exciting lessons for all skill levels. Sean is a creative, effective communicator, with intuitive movement awareness and a focus on the vital power of dance to delight and transform us. Dance lessons with Sean will give you more confidence on and off the dance floor! 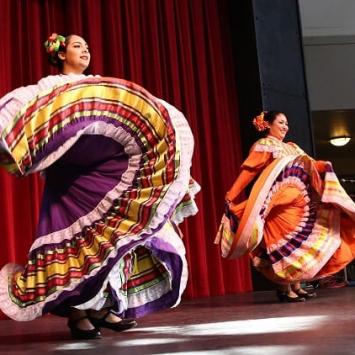 Joyas Mestizas is a traditional dance group, showcasing regional costuming in their performances. The group has been performing in front of audiences since 1988. Joyas Mestizas is the area's first Mexican Folkloric Youth group. The group performs on a regular basis at a variety of events, such as, Folklife Festival, Fiestas Patrias, and a wide variety of other community events and celebrations.

Learn more about this group here. 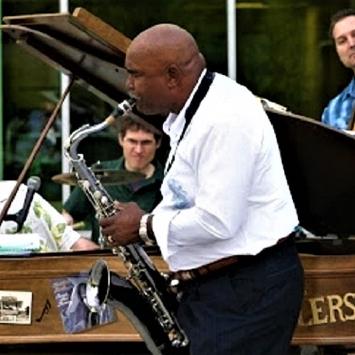 Eric “Two Scoops” Moore, "Seattle's own version of New Orleans' Dr. John" (Seattle Times) has been pounding the piano since age 5. Eric spent years touring & recording with old Chicago Blues artists, playing clubs and festivals in 36 states, 12 countries on 3 continents. The 8-time BB Award Winner is a prolific songwriter and recording artist. He has released 10 critically acclaimed CDs. He writes some of the funniest and most mouth-watering lyrics you've ever boogie-woogied to! Eric’s hit “Big Buffet” has gotten steady airplay for over 25 years!

Eric will be joined by Ari Levitt to provide a brief dance lesson before Two Scoops' set!

Ari is well-known for his fun, energetic, and delightful classes that can't help but inspire students with a love and passion for dance. He has been teaching and performing nationally, and internationally for over 30 years; is the founder and director of "Waltz Week in Vienna”, “Dance Mexico”, & "The New Zealand Dance Adventure"; and is one of this country's leading innovators and instructors in the areas of fusion, blues, waltz, swing, & night club 2-step. 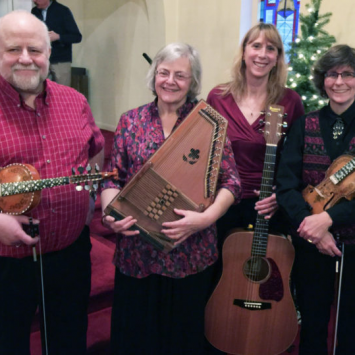 Hjarta Herring began with a simple request about 6 years ago when the Nordic Heritage Museum, now the Nordic Museum, put out an S.O.S. in need of a band. Kris, fiddle, gave a couple of us a call, and it grew from there. We're thrilled to continue performing at various events throughout the year, including here at Folklife! 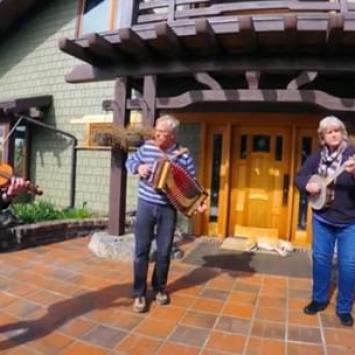 The Six Feet Back Band plays tunes from Norway, Denmark and Sweden. The five-piece band began six feet back from the sidewalk in Mukilteo with Nick Ericson on torader and Jared MacFarlane on fiddle, and currently features a flautist, Lyn Jackson on guitar and banjo, and Frank Brown on bass. Check out the band’s YouTube channel by searching Six Feet Back Band.

The band plays in Seattle around Greenlake, for dancers at Lighthouse Park, for hikers in the wilderness, and around Mukilteo. Email SixFeetBackBand@gmail.com if you want to dance with us in a park near you! 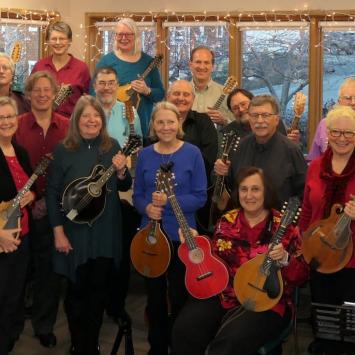 Seattle Mandolin Orchestra is a community-based orchestra playing mandolin-family instruments and guitars.Their instruments include mandolins, mandolas, octave mandolins, mandocellos, and sometimes mandobass. While mandolin orchestras in the U.S. were numerous in the early 20th century, and were revived as a part of the resurgent interest in folk music in midcentury, their orchestra is now the only one in the State of Washington.They are passionate about their plucked instruments and the beautiful music they make.They play a variety of music including folk, classical, Italian, and modern music, and particularly love playing music written specifically for the mandolin.

Donate directly to the artists on PayPal donate@seattlemandolin.org 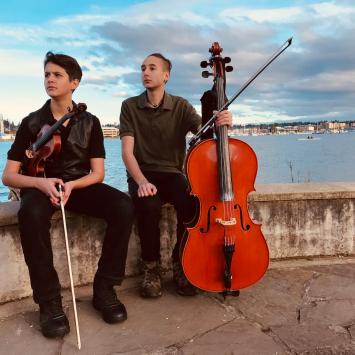 Brothers Dante & Eros Faulk are a cello and fiddle traditional folk duo who have been playing music their whole lives. Both picked up a string instrument at the age of 3, and have since performed extensively across the Pacific Northwest at concerts, festivals, and contradances. Today, their love and understanding for traditional music combined with their awareness of modern and popular music (ranging from rock, jazz, EDM, and more) yields an inventive and contemporary sound that is still true to their traditional roots.

Eric Curl has called contras for 25 years in the far west states. He enjoys calling dances that have good flow and allow for minimal calling so the dancers can hear and enjoy the music. 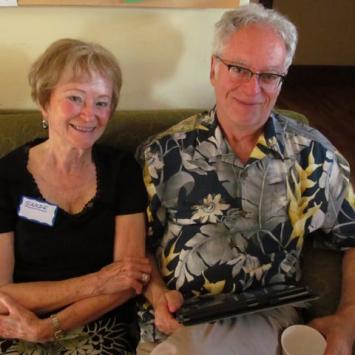 Sande and Alan have been hosting Monday night jam sessions of popular contra dance music at their home for nearly 18 years. They are now a remote band using Zoom but looking forward to resuming in-person sessions some time this year. They play a wide variety of tunes suitable for contra and square dance.

Donate to Sande and Alan directly through PayPal. 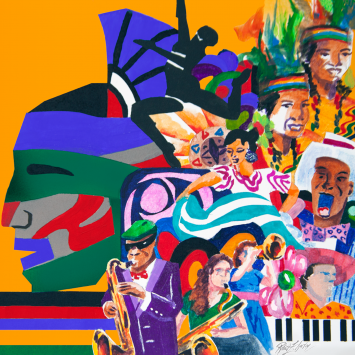 Dance Bhangra with Rhythms of India ^

To get everyone excited about high energy of our culture and performing arts of India. For Indians- to get inspired by the rich and vibrant nature of our dances. For non-Indians to give them a first hand glimpse of our culture through the dance art-form. Get our children involved as they become familiar with dances and performing arts of Indian heritage, and develop self-confidence and self-esteem. 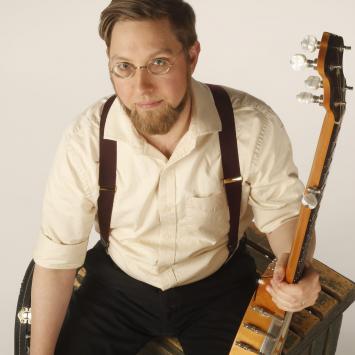 Paul Silveria is a musician, songwriter and square dance caller who has connection at the heart of his work. He has spent 15 years developing his repertoire of folk songs, instrumentals, and vintage-styled originals - played on the banjo and presented with the stories behind the music. Paul is also a teacher who leads workshops, perfoms in the schools, and has written a guide to square dancing to help new callers, and introduce the joy of old-time dance to new communities.

Donate directly to the artist here. 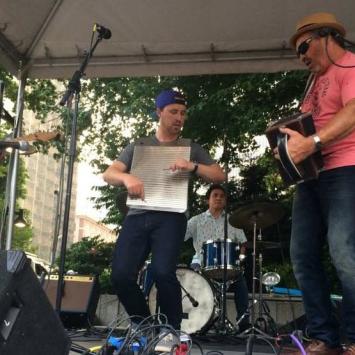 Y’all wanna dance? Come hang out with Bayou Envie and get a taste of the Cajun and Zydeco goodness! Led by Danny and David Salonen, the brothers from Vashon team up with Mark Myking (accordion), zydeco veteran Kevin Kilmartin (guitar), and funk/jazz maven Tai Taitano (drums) to form a pocket that lives with one foot in the music’s rich history and the other in its captivating and evolving present. Help us bring Cajun and Zydeco to a new generation in the PNW, and remind old-timers why they fell in love in the first place. 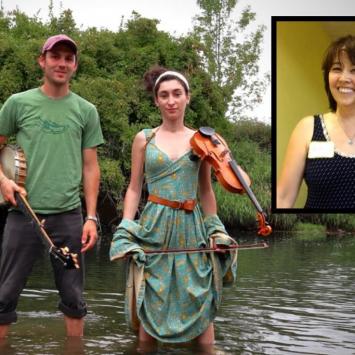 Old-time tunes with sweet double fiddles, rocking banjo, and tight vocal harmonies from Penka Jane Culevski and Brian Lindsay; a sound that is both nostalgic and bright with possibility. Enthusiastic and dynamic calling by L.A. based caller Jacqui Grennan.

Learn more on their website and donate to them directly.

Jacqui has been calling contra dances around the country both online and in person for several years. She called contra dances at NWFL in 2018 and has also called at dance weekends and festivals such as NEFFA on several occasions and at Flurry 2020. She likes to put together dances that are varied in movement and in pace and is noted for her enthusiasm and clarity in calling. 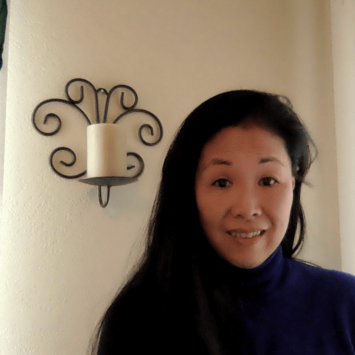 Claire is passionate about bringing music and dance to more people! She grew up dancing and has called dances from Hawaii to both coasts. She enjoys teaching a variety of dances: Community ceilidhs, barn dance, Contra, Squares, English, Social waltz. 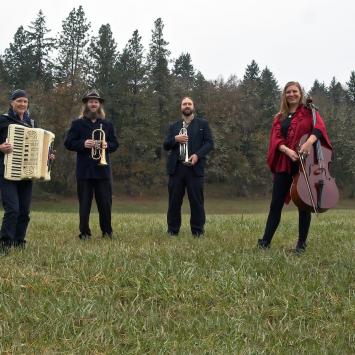 Kef plays dance music of Bulgaria, Serbia, Macedonia, Albania and Greece. The ensemble consists of two trumpets, sax, accordion, vocals, cello and drums. Hailing from Eugene, Oregon, the group formed in 2006 and has been playing for dancers and listening audiences throughout the Pacific Northwest ever since.