At the very top of the number 5, dressed in colorful beaded jewelry, is an illustration inspired by a photo of vocalist Moye Kashimbi, taken by Christopher Nelson. Moye Kashimbi performed as a part of Maya Soleil and Soyaya in 2014 at the Northwest Folklife Festival.

Moye Kashimbi has performed with a variety of local groups including Soyaya and Maya Soleil.

Maya Soleil is an electric Afro-World fusion ensemble consisting of world-class performing artists from Africa, Asia, Jamaica, and the U.S They perform both as an electric band whose stylistic influences range from the Afro-beat of Nigeria and highlife music of Ghana to the Khalandula of Zimbabwe. Based in Seattle, Maya Soleil has performed everywhere from Bumbershoot to the Pike Place Market to here at Northwest Folklife, helping cement their status as a hometown cultural icon. The mix of upbeat music, colorful costume, and traditional styles of dance make for an audio-visual experience like no other.

Founded by the late Mohammed Shaibu, Soyaya (translated to “affection” in Hausa) specialized in playing indigenous African rhythm and blues called Palmwine and Highlife for over 30 years. Through Soyaya, Mohammed was able to showcase the beauty of African music and song through performances at Festival Sundiata, the Spirit of Africa Festival, the Northwest Folklife Festival, and many more. 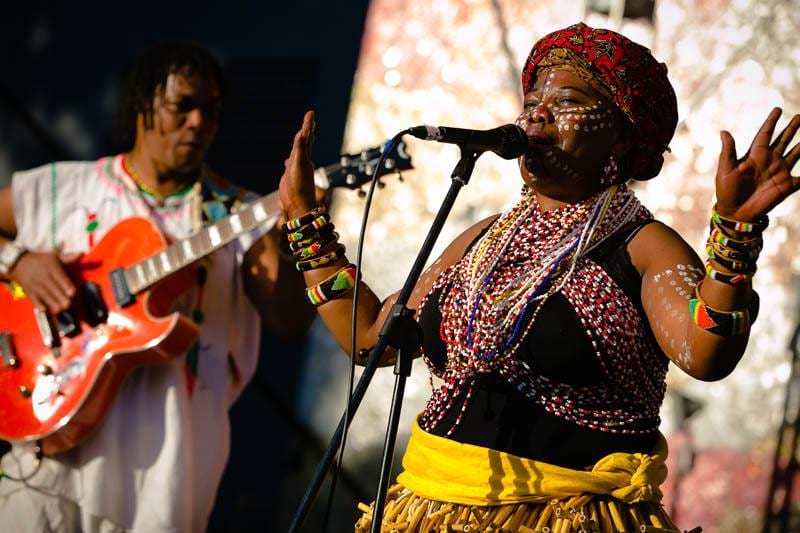 Both Maya Soleil and Soyaya work to share the African diaspora's music, dance, and culture with the greater community and beyond. We are honored to have hosted their performances at the Northwest Folklife Festival and to have their legacy as a piece of our 50th anniversary.

You can learn more about Maya Soleil and Soyaya here: