Northwest Folklife Board of Directors 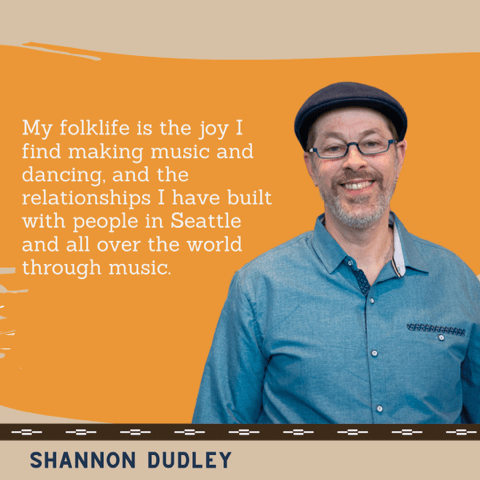 Shannon Dudley is a musician and ethnomusicologist who is inspired by the power of participatory music to bring people joy and connectedness. He performs on steel pan with his band Dingolay and directs the UW Steelband. He has also been active in the Seattle Fandango Project and other Seattle musical communities, both as a participant and as the coordinator for the UW Ethnomusicology program’s Community Artists in Residence. As a scholar, one of his most gratifying projects was to curate the bilingual museum exhibit, American Sabor: Latinos and Latinas in U.S. Popular Music, which opened at the EMP in Seattle in 2007 and toured 18 cities in the U.S. and Puerto Rico before being published as a book in 2018.

Shannon has attended the Northwest Folklife Festival since his kids were little and it is one of his favorite things about Seattle. He looks forward to working with Northwest Folklife’s board and staff to keep the festival strong, involve more of Seattle’s communities in it, and promote opportunities for music learning and participation among Seattle’s diverse communities throughout the year. 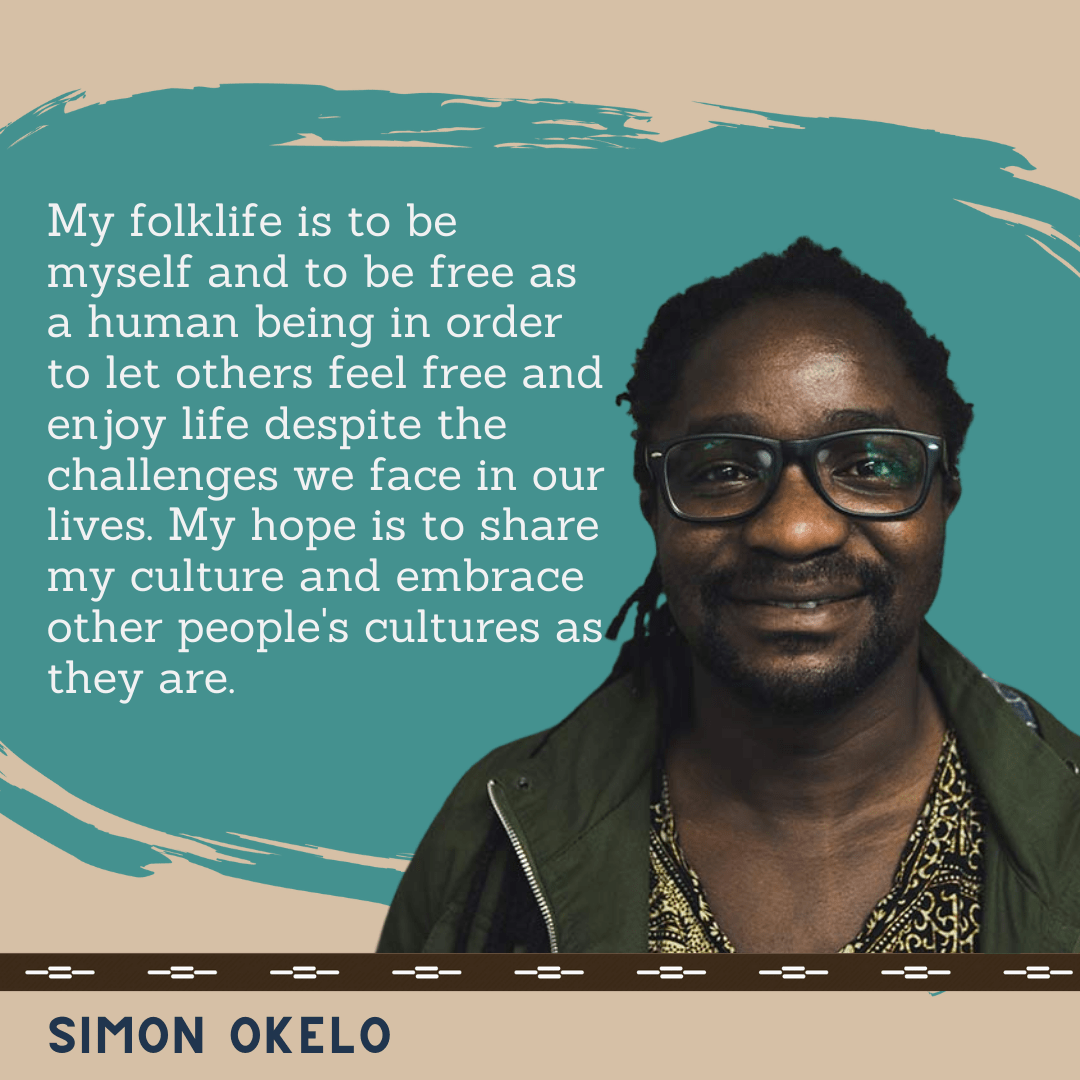 Raised in Manyatta in Kisumu, Simon Okelo discovered his potential in art and music, organizing “Unite the People” Concerts in Kisumu in the wake of 2007’s post-election violence. He founded One Vibe Africa to establish a Music & Art Center in Kisumu, which encourages its citizens to participate in the critical engagement of culture, art, music, technology, and education. His drive to inspire youth to realize their full potential, avoid drugs and violence, and create a sustainable future is at the heart of his work.

Simon honed his skills in the non-profit business as director at Young Generation Center in Kisumu, Field Director for Africa for Solace International, and Associate Director for MED25 International. He is inspired to continue to create connections and opportunities for communities in both Seattle and Africa and pursue creative work and fatherhood. As a board member, Simon hopes to represent the African community Folklife serves and bring his experiences that might help enrich Folklife's leadership and enhance our impact. 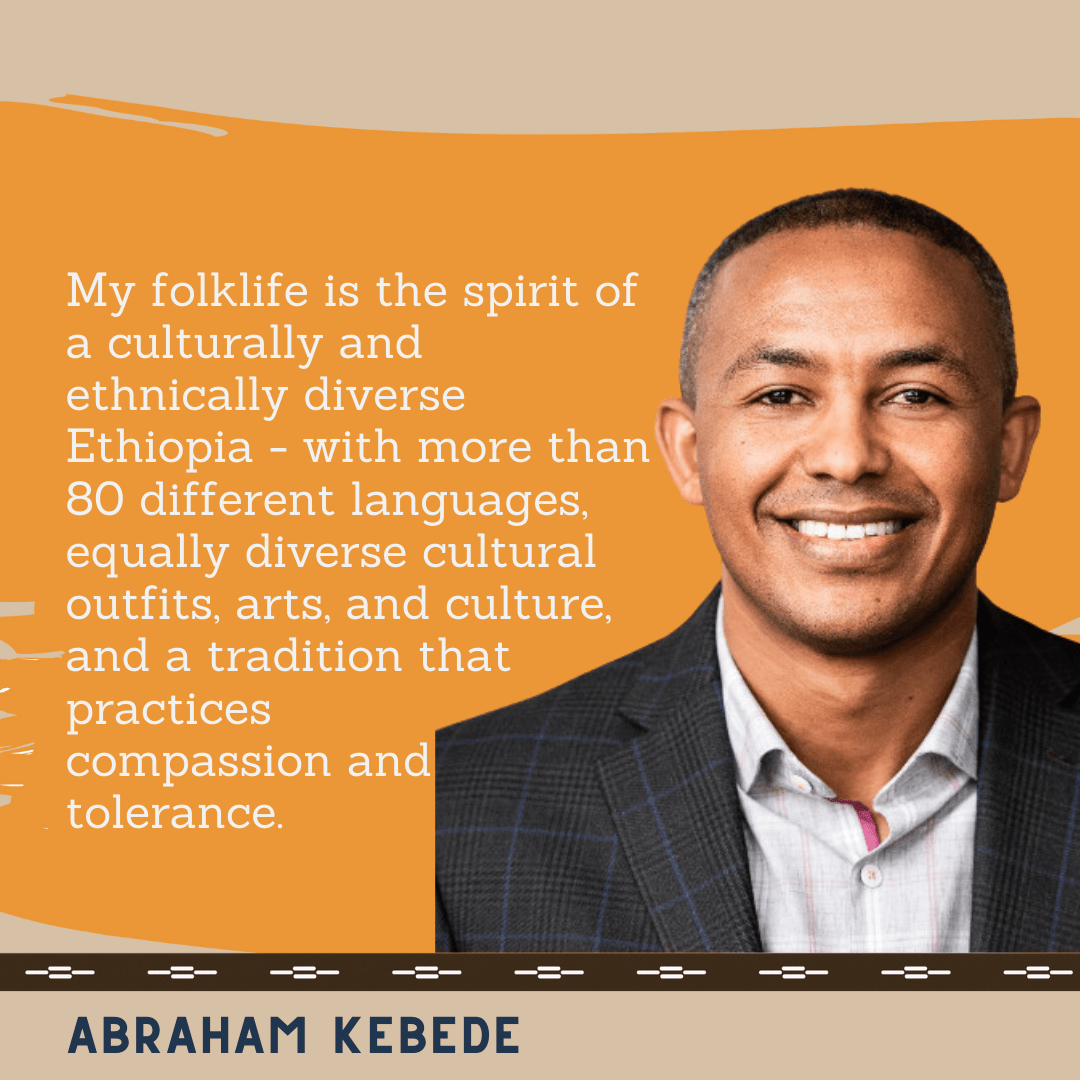 Abraham Kebede's years of work in software and technology development belie a multifaceted love of community work, with arts and culture being the foundation. He believes he can manifest the most significant impact by supporting creative culture and the artists that produce it, recognizing that lifting others is his best tool for building community and change. He also just loves art and wishes to make the best impact as a fan.

Outside of his technical work in identity and access, he organized cultural events and activities in the Seattle area, targeting the Ethiopian and Eritrean communities. As a board member with Northwest Folklife, he hopes to further the organization's reach to those communities and promote their artistic and cultural work. A lifelong learner, he also hopes to learn from the broad range of people that Northwest Folklife brings together. 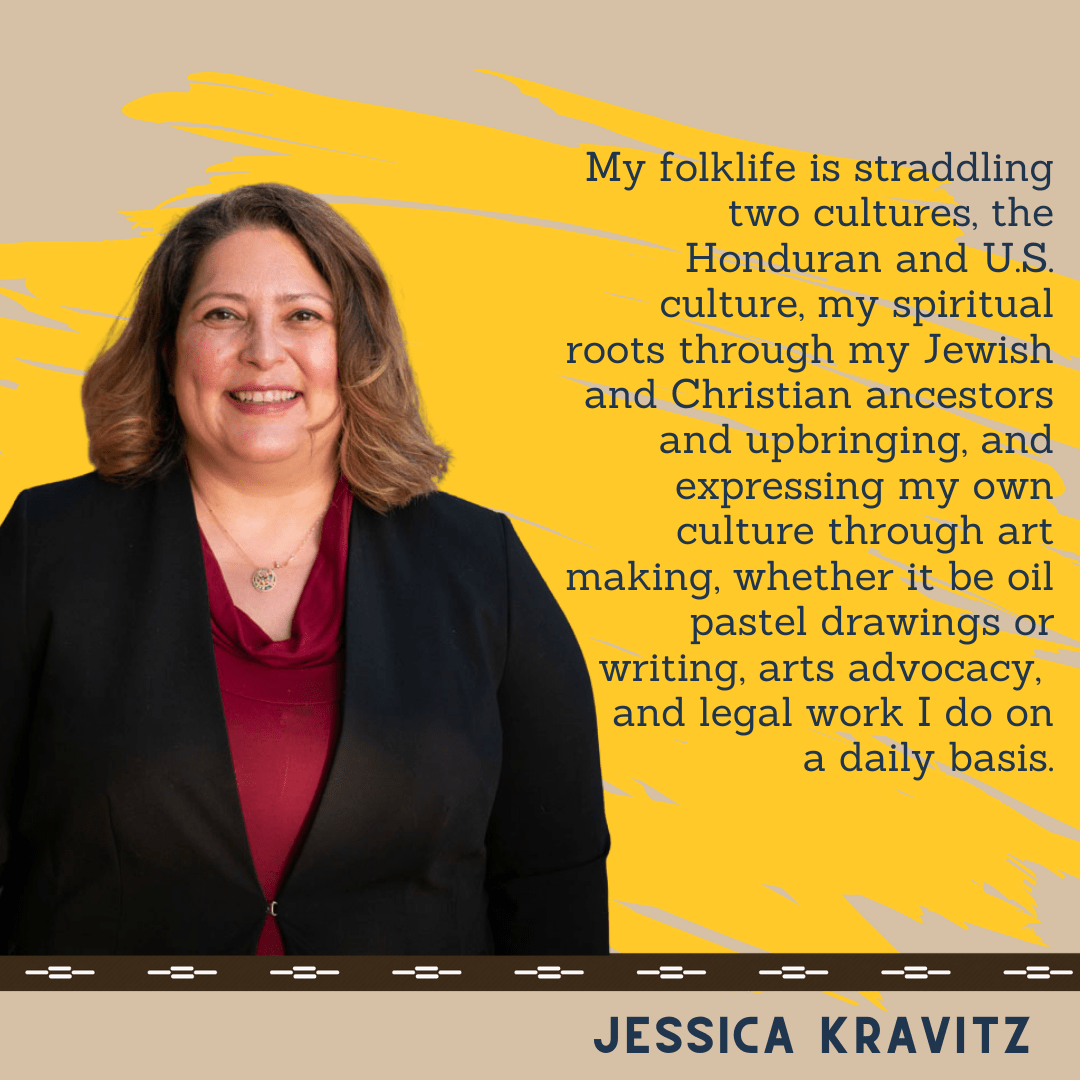 Before practicing law, Jessica Kravitz was the City of Redmond's Arts and Culture Commissioner. Involved in the arts since childhood, a passion for theater and music expanded to art and art history through her academic career. She believes that art and culture are intertwined in our everyday lives, so supporting efforts to enrich and expand the sector is part of her.

With a background in political science, Jessica has focused on political, social, and cultural issues at home and abroad. Currently, she serves with a wide variety of organizations: Founder and Treasurer of VALA Eastside, Board member at OneRedmond Foundation, Partner at Ryan James Fine Arts, President-Elect for Redmond Kiwanis Club, Cohort member of Innovation Lab, member of Redmond's Economic Development Organization & Chamber of Commerce, and continues the pro bono immigration work she started when an intern at Northwest Immigrant's Rights Project.

As a board member with Northwest Folklife, she hopes to bring focus and reminder to as many people as possible that we can truly see ourselves in others and learn from each other's differences through art and culture. 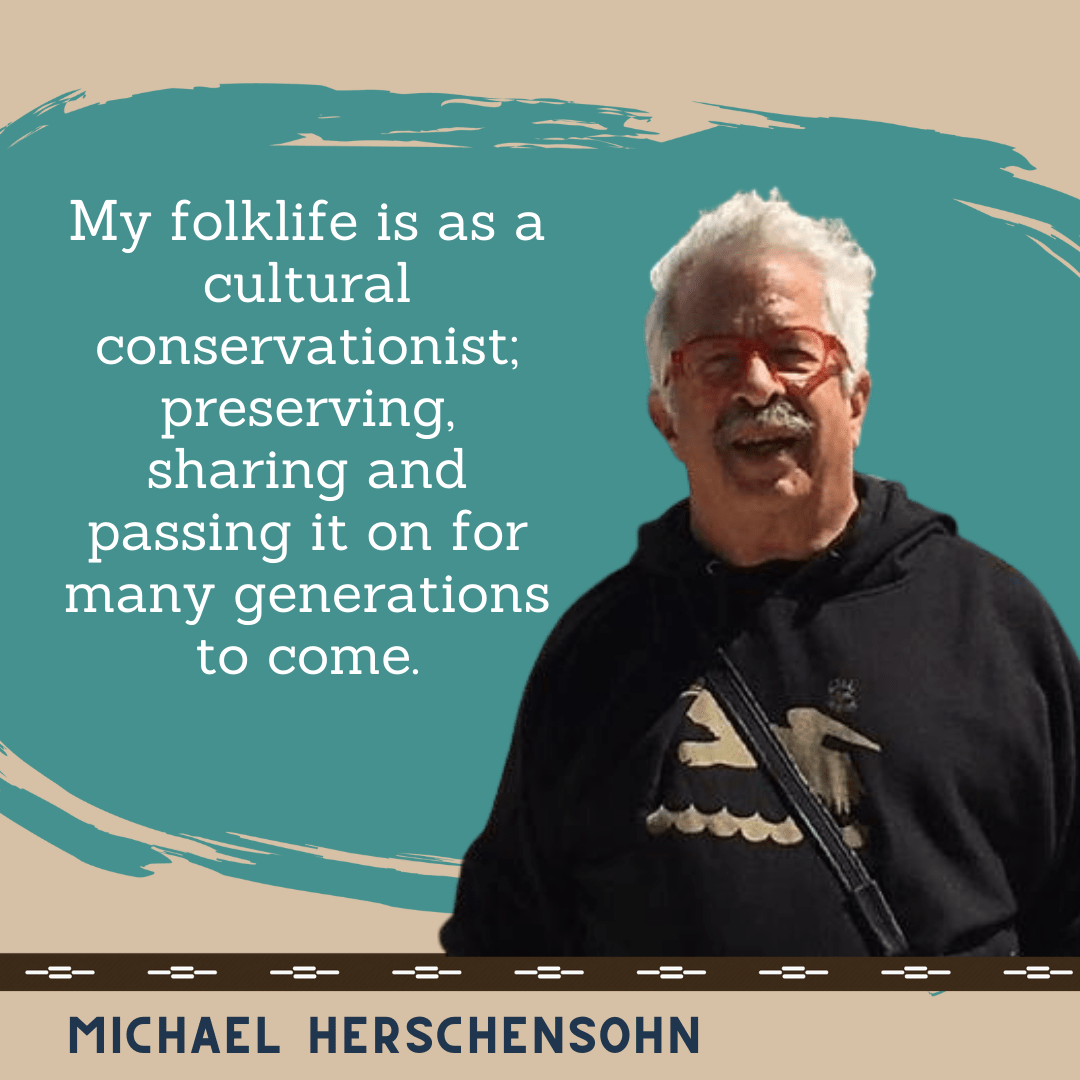 Michael Herschensohn has made a tremendous mark in Seattle with his service throughout his career and retirement. As a young person, he was drawn to music, theater, and literature, a pivotal moment being his first trip to the Museum of Modern Art.

His professional life saw him leading The Children’s Museum, MOHAI, and Northwest Folklife. His retirement continued his commitment to enriching the community with board service ranging from Seattle Neighborhood Greenways, ACT Theatre, Reel Grrls, Inspire Washington, and the Queen Anne Historical Society, in addition to his work as Treasurer at Northwest Folklife. In addition, he is an avid traveler both by plane across the globe and by bike across the Pacific Northwest. He now hopes to help mentor the next generation of leaders in our community. 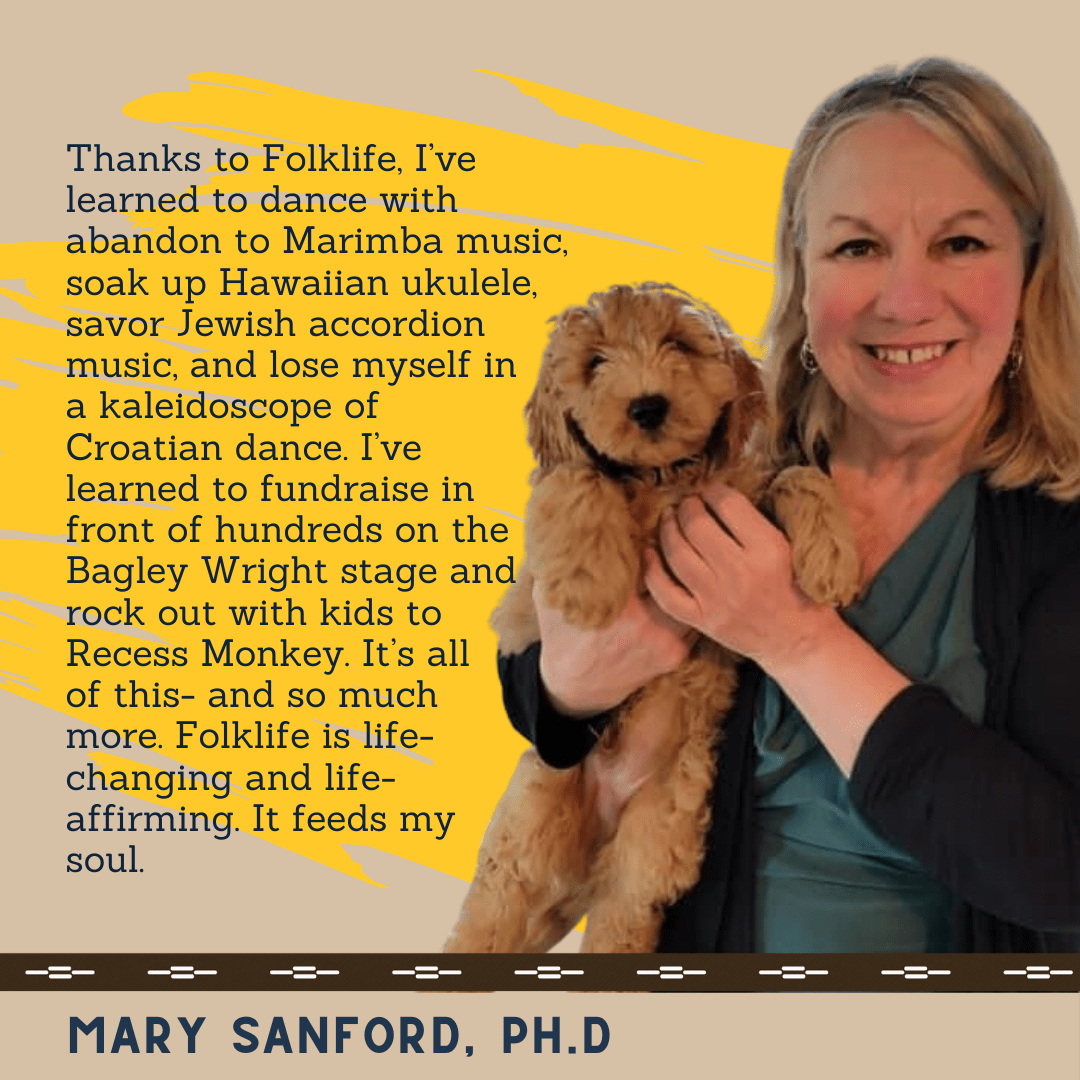 Dr. Mary Sanford is a first-generation American. Her father came to the United States as an 18-year-old, fleeing Ukraine for Paris then NYC, and promptly changing the family name to Sanford to sound “American.” Settling in suburban Long Island, Mary grew up in a multigenerational Ukrainian-American home. Surrounded by the diverse cultures and languages of New York, alongside the doting attentions and culture-bearing of her Czechoslovakian grandparents, the seeds of inclusion were planted early on.

Her professional life has focused on education. Before earning her doctorate, she was a special education teacher, eventually teaching at a host of universities and now Olympic College. An award-winning faculty member who loves helping people maximize their potential, her textbook Teachers as Thinkers: Compassion and Competence in the Classroom, was published by Great River Learning in 2019. In addition to volunteering for Forgotten Children’s Fund and I Want to Help Africa, she also pursues writing, baking, coaching, and travel.

In 1988 she came to Seattle as part of a sabbatical, experienced the Northwest Folklife Festival for the first time, and was instantly hooked. Since 1990, she’s volunteered all four days of the festival as a Roving fundraiser, making the rounds with her 6-foot sign and bringing delight to the avid button collectors when they donate. 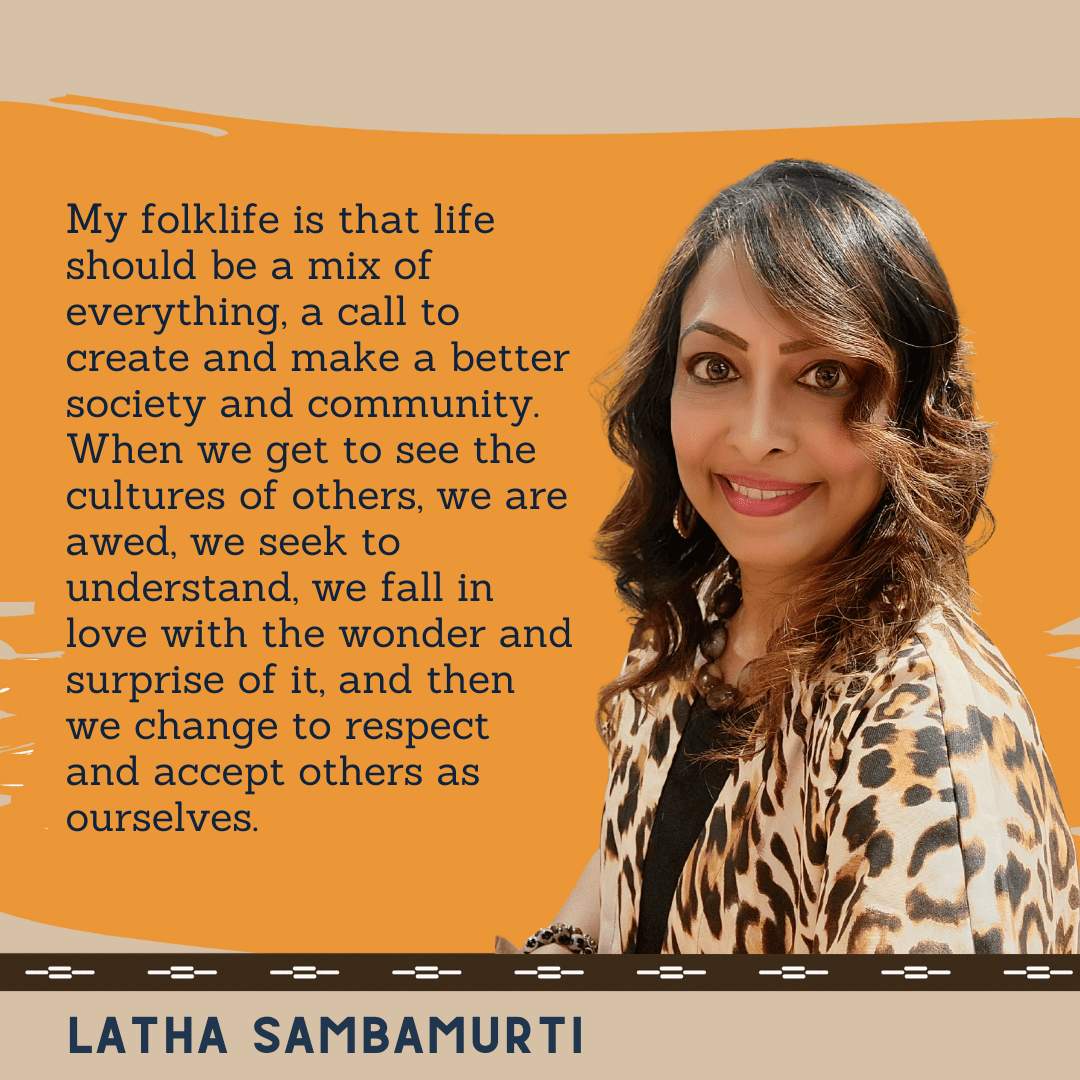 Latha Sambamurti has been a leader in Washington’s cultural sector since the early 2000s, but her family fostered her arts-rich life from a young age. Surrounded by classical musicians and lyricists, Latha also trained diligently for music, dance, and oration contests. She described her home as full of art and studies, with early morning music class, school, more practice, and homework being her daily routine.

As a trained musician in the Carnatic tradition, teacher, lecturer, and singer, she has performed across the Pacific Northwest, Canada, and India solo and with her band Chai Tea Latte. Productions for children based on the heritage and culture of India have also utilized her writing, directing, and choreography skills. She teaches Indian arts, culture, and heritage to children attending Balvihaar classes in Redmond.

At present, Latha is a Redmond Arts and Culture Commissioner. She also currently holds board positions with Northwest Share, 4Culture, Asia Pacific Cultural Center, One Redmond Foundation, LTAC City of Redmond, Inspire Washington, Kirkland Performance Center, Seattle Latino Film Festival, and the Center for Washington Cultural Traditions. She has also been Chair of the Redmond Arts and Culture Commission, Member of Arts Advisory Board of 4Culture, and a Washington State Arts Commissioner. 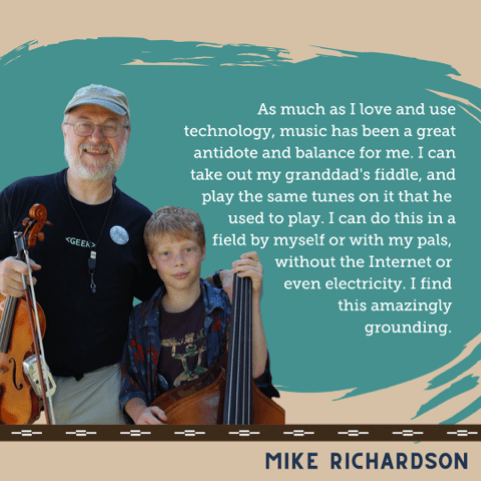 A founding member of Northwest Folklife, the Country Dance & Song Society, and the New England Folk Festival Association, Mike has called, played, toured, and taught across 14 states, two provinces, five shires, two oblasti, and four countries both solo and with the bands Hands Four, Scotsbroome, Bladerunners, and Childsplay. Some of his tunes and dances can be found in his book Crossing the Cascades. Between musical gigs, he also teaches radiology at the University of Washington. 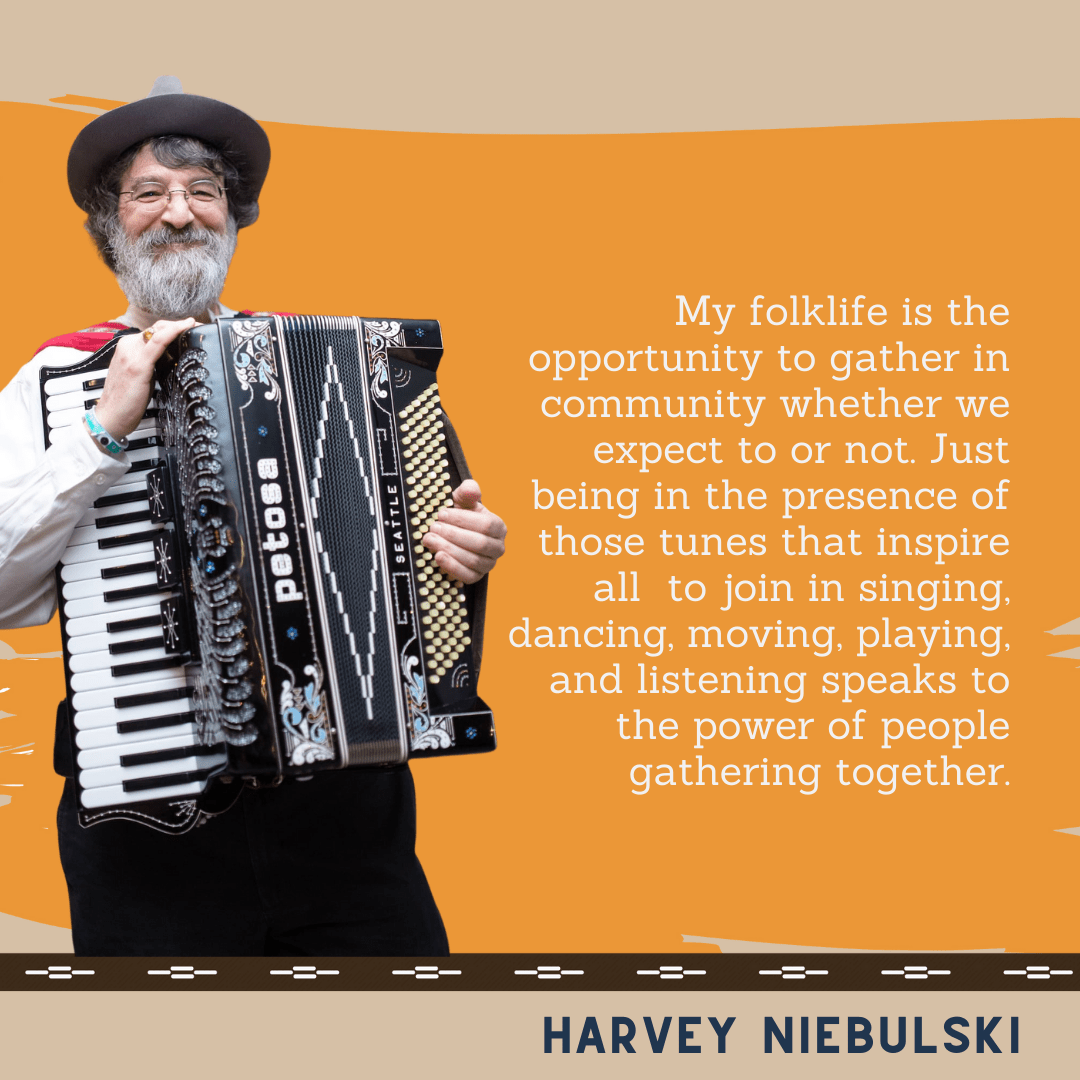 First inspired by the folk music played on Pacifica Radio on Sunday afternoons by Oscar Brand, Harvey Niebulski’s days were spent transcribing lyrics and music from the reel-to-reel tapes he recorded of the shows. His recognition of the power of gathering with music was amplified by the sing-alongs in Washington Square Park, the fiddlers’ house party in the Bronx, and his own adventures playing on the street in Greenwich Village.

An accordionist who plays klezmer and Eastern European music and sings in Yiddish. As a member of the board since 1997, Harvey is deeply committed to the power of community gathering and providing a stage for people to share and celebrate their music. 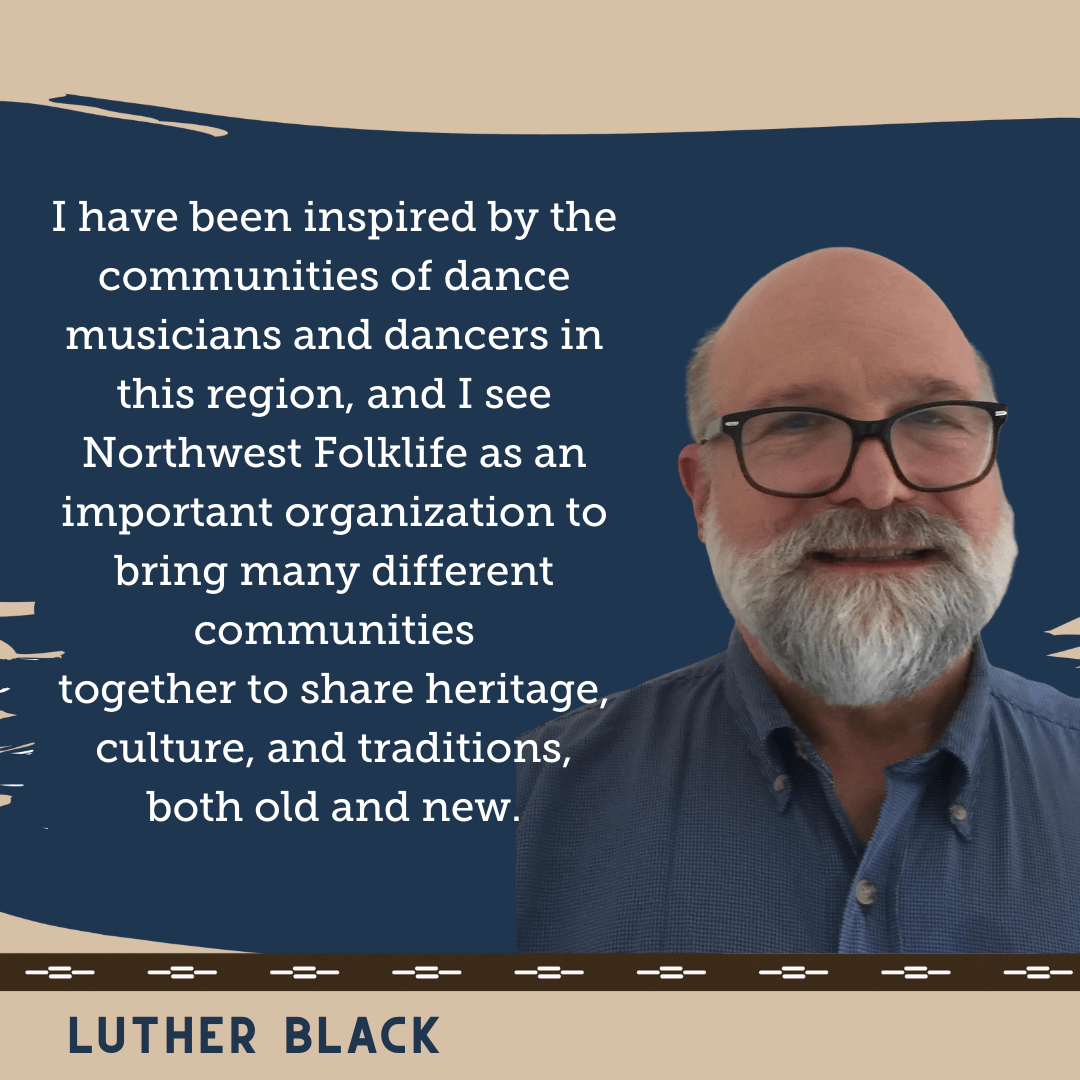 A retired marine environmental analyst, Luther Black has shifted his focus to nurturing and growing the Roadhouse Contra Dance community. As a founding member of the FolkFloor Committee for Roadhouse dance floor, he spends time as a community coordinator, expanding his affiliations to Old-Time dance, English Country, and Cajun dance and music communities.

Since first becoming a board member in 1987, Luther has filled roles with Folklife from greeting at the entrance, acting as an emcee, working at Friends of Folklife HQ, and being the former Immediate Past President. Now, he continues his service as Chair of the Finance Committee and Vice-Chair of the Development Committee. 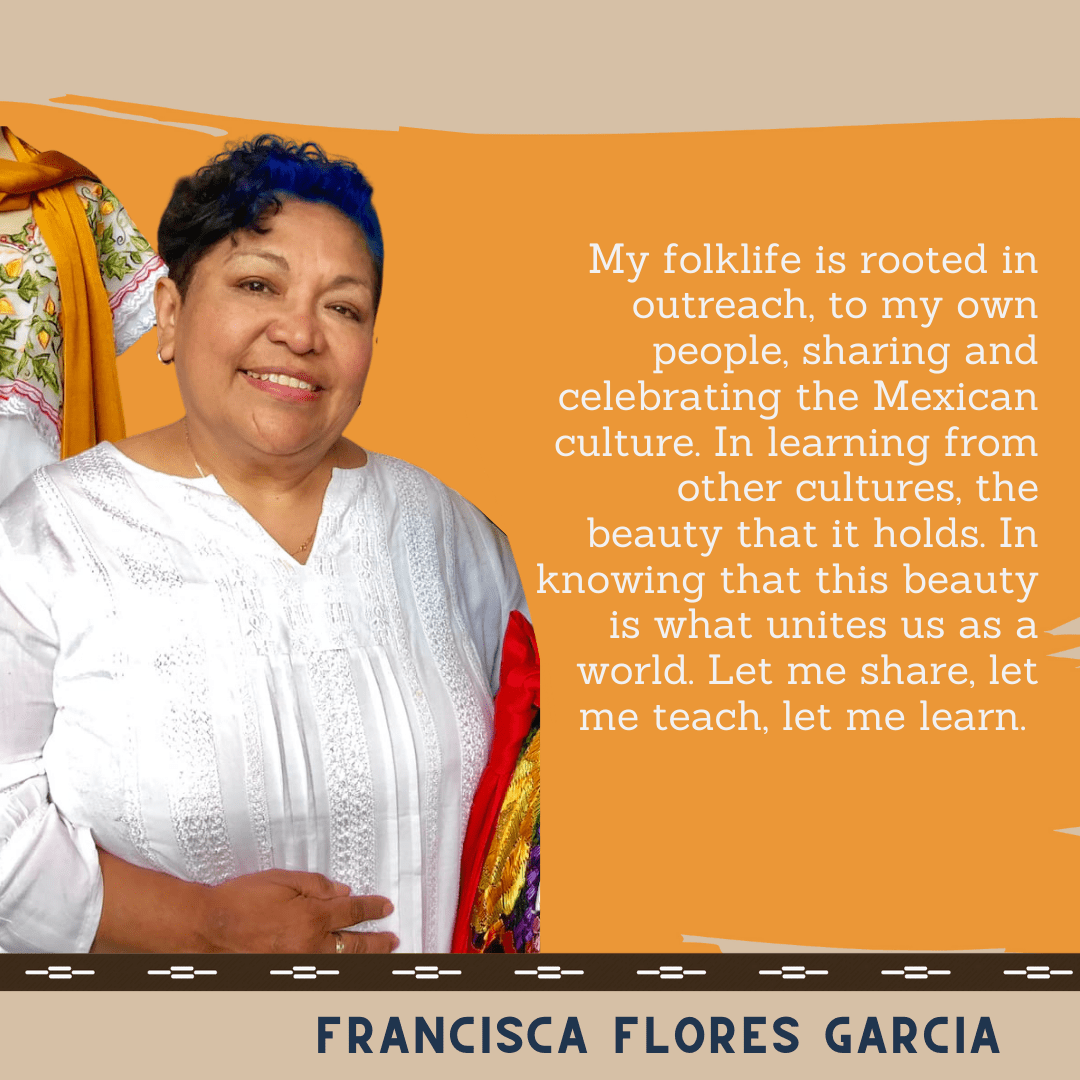 Francisca Flores Garcia’s expansive skills as a folklorist, curator, artist, teacher, lecturer, and Mexican culture and tradition bearer are in her blood. She grew up learning the traditional customs of her culture from her mother and grandmama. Her mother passed on how to sew Mexican Folkloric Attire and she continues the tradition by teaching her daughter her skills as a seamstress and designer. Along with her mother, her grandmama was a Culture Bearer and was a Curandera, a healer that uses folk remedies.

Along with sewing for both major folkloric dance groups in Seattle, Bailadores de Bronce and Joyas Mestizas, she founded Machtia, an organization named for the Nahua word “to teach,” built on teaching her traditions and culture. Her work has been seen in Centro de la Raza, Sea Mar Museum, the Mexican Consulate of Seattle, and Rainier Art Center. Her creations for Joyas and Bailadores de Bronce has been featured at eSe Theater, Act Theater, Paramount Theater, and Meany Theater. As the Northwest Folklife Board President, she hopes to help lead the organization into the next fifty years by supporting the hopes and dreams the staff and board have for the organization with the input of our communities.